East of Santa Cruz stretches a vast, sparsely-populated plain covered in scrub and fast disappearing dry tropical forest, which gradually gives way to swamp as it approaches the border with Brazil. Named Chiquitos by the Spanish (apparently because the original indigenous inhabitants lived in houses with low doorways- chiquitos means small), in the eighteenth century this region was the scene of one of the most extraordinary episodes in Spanish Colonial history, as a handful of Jesuit priests established flourishing mission towns where the region’s previously hostile indigenous inhabitants converted to Catholicism and settled in their thousands, adopting European agricultural techniques and building some of South America’s most magnificent colonial churches. This theocratic socialist utopia ended in 1767, when the Spanish crown expelled the Jesuits, allowing their indigenous churches to be exploited by settlers from Santa Cruz, who seized the Chiquitano’s lands and took many of them into forced servitude. Six of the ten Jesuit mission churches still survive, however, and have been restored and declared UNESCO World HJeritage Sites – their incongruous splendor in the midst of the wilderness is one of Bolivia’s most remarkable sights.
San Javier
Some 220Km northeast opf Santa Cruz, San Javier (also known as San Javier) is the westernmost of the Chiquitos Jesuit mission towns and was the first to be established in the region, having been founded in 1691. The town is now a quiet cattle- ranching centre with no real attractions other than the mission church itself. 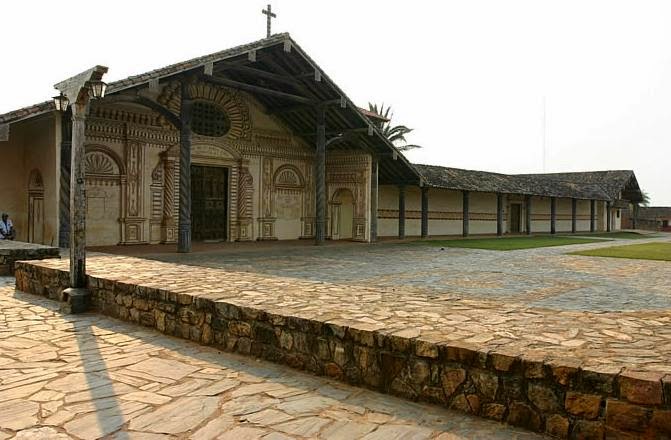 ·         Iglesia de San Javier
Completed in 1752 under the directions of Martin Schmidt, the formidable Swiss Jesuit priest, musician and architect who was responsible for several Chiquitos mission churches (which were immaculately restored between 1987 and 1993 under the guidance of the equally dedicated Swiss Jesuit architect Hans Roth), the huge church has a squat, sloping roof supported by huge spiraled wooden pillars, with a simple Baroque plaster façade. Above the doorway a Latin inscription common to most Jesuit mission churches in Bolivia reads Domus Dei et Porta Coeli (House of God and Gateway to heaven).
On the right side of the church as you face it a doorway leads into a cloistered courtyard, which features a freestanding bell tower. Inside the church the exquisite modern wooden retablo behind the altar features beautiful carved scenes from the Bible and of the Jesuit missionaries at work in Chiquitos. The HIS inside the fa¿laming sun at the top of the retablo stands for Jesus Savior of Man in Latin: combined with three nails and a crucifix, this is the symbol of the Jesuit order, and you´ll see it painted and engraved on mission buildings throughout Chuiquitos.
Concepción

About 68km to the east, the former mission town of Concepción is slightly larger than San Javioer, but otherwise very similar. The mission was founded in 1709 by father Lucas Caballero, who was killed two years later by the Puyzocas tribe, which later settled here. At the towns centre is broad plaza lined with single-storey whitewashed adobe houses with tiled roofs that extend over the pavement, a colonial architectural style introduced after the expulsion of the Jesuits. In the middle of the square stands a simple wooden cross, surrounded by four palms trees originally a feature of all the mission compounds.
Concepcion is the centre for efforts to reconstruct the Jesuit mission churches of Chiquitos,. And the main workshops for woodcarving and painting are behind the church a block east of the plaza. The staff here is usually happy to show visitors around for free at 10.30 am and 3.30pm from Monday to Friday.

San Ignacio de Velasco
178km east of Concepcion, San Ignacio de Velasco was founded in 1748, just nineteen years before the expulsion of the Jesuits from South America, but quickly grew to become one of the largest and most developed of the mission towns. Now the largest settlement in Chiquitos, it acts as a bustling market centre for an extensive frontier hinterland of large cattle ranched and isolated indigenous Chuiquitano communities. At its centre lies the broad plaza 31 de Julio, which is graced by numerous massive swollen-bellied toboroche trees, whose tangled branches blossom into brilliant pink and white in June and July. The towns wide, unpaved streets fan out from the plaza, and are lined with low houses whose tiled roofs extend over the pavement, supported by wooden beams. 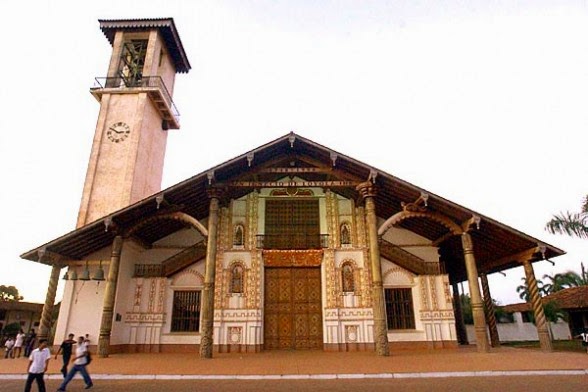 San Miguel
Set amid scrubby forest broken by patches of cattle pasture, San Miguel is a sleepy collection of whitewashed houses about 40km south of San Ignacio on the main road to San José de Chiquitos, its humble structures make the first sight of the splendid Iglesia de San Miguel even more astounding; set on a small rise overlooking the central plaza and dominating the town, the restored church is perhaps the most beautiful of the mission churches. Founded in 1721 and built in the same barn-like style as most of the others, the church, the church facade is beautifully painted with Baroque floral designs, with pictures of St. Peter and St. Paul on either side of the main door. 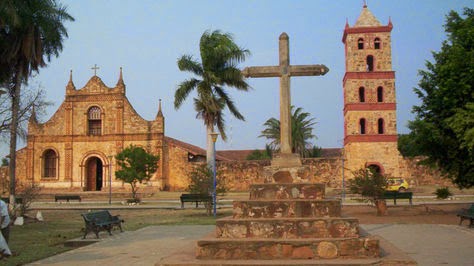 To get inside, enter the walled cloister to the right – part of the original mission compound or Jesuit college which is now used by the parish priest: go under the freestanding white adobe bell tower and ask in the parish offices for someone to let you in –you are likely to have to ask around for someone with a key. Inside, the soaring roof is supported by massive tree trunks carved in spirals, while the walls are lined with metre-high wooden statues of angels. The main altarpiece is smothered in gold leaf, with alcoves filled by statues of angels and saints including (in the centre) the Archangel Michael, in a golden helmet and shield, holding a three-pronged sword aloft as he tramples the devil underfoot.
San Rafael 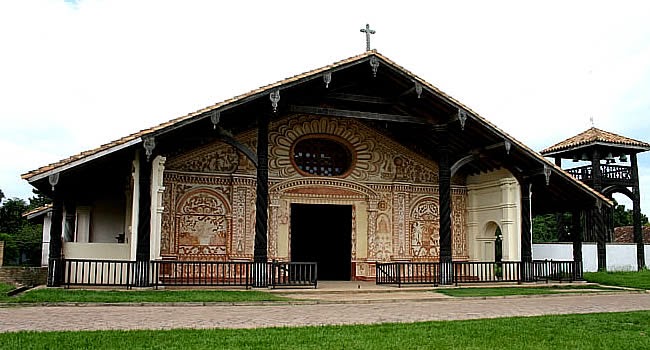 The second Jesuit mission in Chuiquitos when it was founded in 1696, the town of San Rafael sits 35km southeast of San Miguel, and boasts the biggest of all the region’s Jesuit churches, the Iglesia de San Rafael. A cavernous structure with a free standing bell tower supported by four spiraled wooden pillars, it was built under the direction of Martin Schmidt between 1747. The magnificent interior features beautiful frescoes of angels, and some beautifully carved statues of saints in the alcoves of the golden altarpiece.
Santa Ana
About 20km north of San Rafael on a different road back to San Ignacio, the village of Santa Ana is home to perhaps the least architecturally imposing of the mission churches of Chuiquitos. Occupying one side of a large grassy plaza where donkeys graze and schoolchildren play football, the Iglesia de Santa Ana has not yet been fully restored and as such retains an intimate, rustic charm more in keeping with the sleepy atmosphere of its surroundings than the grandiose edifices of San Rafael or Concepción. There’s some speculation as to whether this is the original Jesuit church at all built entirely of wood, it has none of the usual HIS signs and may have been rebuilt shortly after the order was expelled in 1767. 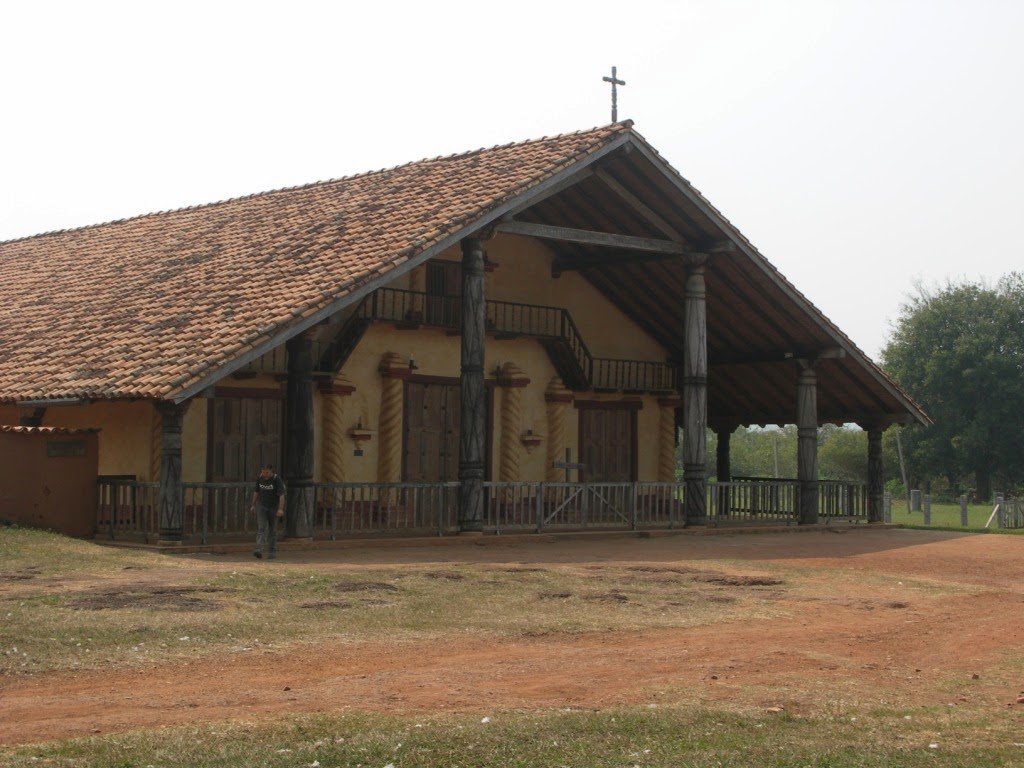