Isla del Sol
Isla del sol is the largest of the forty or so islands in Lago Titicaca and home to several thousand Aymara campesinos. The three main settlements, YUMANI, CHALLA and CHALLAPAMPA, are all in the east coast. Scattered with enigmatic ancient ruins and populated by traditional Aymara communities, it’s an excellent place to spend some time hiking and contemplating the magnificent scenery. 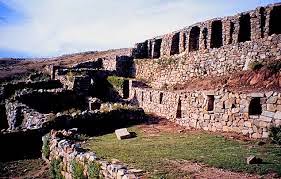 
The island’s northernmost settlement, CHALLAPAMPA was founded by the Incas as a service centre for the nearby ceremonial complexes. Set on a narrow spit of land between two large bays on the east coast of the island, the village has a small museum, and several places to stay. A short walk from the village lie several fascinating Inca sites. Free local guides meet boats and can show you around the area, though many travelers find this quite a slow process.
·         The museum
The village’s museum has artefacts found both on the island and at sites off the coast, where offerings were dropped into the water, and tales of lost underwater cities persist to this day. The collection includes bronze idols, Inca and Tiwanaku pottery, and miniature human and llama figures delicately carved from spondylus shells.
·         Kasapata 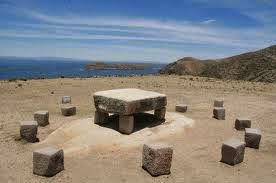 From Challapampa it’s a twenty-minute walk northwest along a steep but easy-to-follow path to the ruins of a substantial Inca site called Kasapata, which was probably a waystation for pilgrims. It’s mostly rubble now, but to the left of the path a large building still stands with five characteristically Incan trapezoidal doorways, while to the north is a large carved stone block that probably had ritual importance.

·         The Santuario
Another twenty minutes further along the path beyond Kasapata is the Santuario, a ruined Inca complex built around a sacred rock. The entrance to the Santuario is marked by the remnants of a low wall. About 100m beyond the entrance you can make out the rectangular foundations of a series of buildings that housed the priests and servants who attended the temple complex.
Inside the Santuario a path crosses a bare rock marked by two depressions shaped like giant footprints dubbed the “Huellas del Sol” (Footprints of the Sun) before reaching the centre of the sanctuary. Here stands Titikala, the sacred rock from which the Incas believed the sun and moon first rose and after which Lago Titicaca was named, though there’s little in the appearance of this large outcrop of weather –beaten pink sandstone to suggest what an important religious site once was.
·         La Chincana 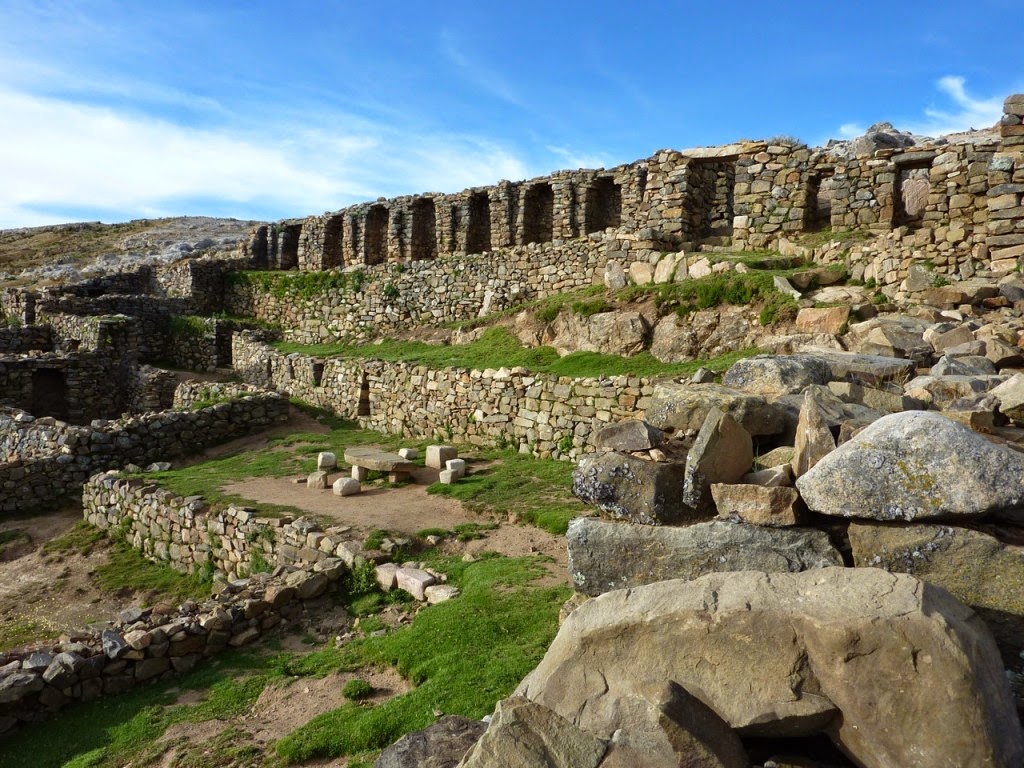 About 200m beyond Titikala to the northwest is a rambling complex of ruined buildings looking out west across the Lake to the Peruvian shore. Known as La Chincana (The Labyrinth), this series of interlinked rooms, plazas and passageways with numerous trapezoidal niches and doorways is thought to have been both the storehouse for sacred maize grown on the island and the living quarters for the mamconas, the so-called “Virgins of the Sun”, women specially chosen for their beauty and purity who attended the shrine, making chicha and weaving cloth for use in rituals, if you have the energy, it’s worth walking ten to fifteen minutes up to the peak at the far northern tip of Isla del Sol panoramic views.

Challa
About an hour south of Challapampa on the coastal path you reach Playa Challa, a picturesque beach on a bay, and the Qhumphuri Hostal and Restaurant. Shortly beyond here the path climbs over a headland then drops down to the village of Challa, which sits above another bay. The small museum near the waterfront has a collection of intriguing dance costumes, masks and musical instruments.
Yumani 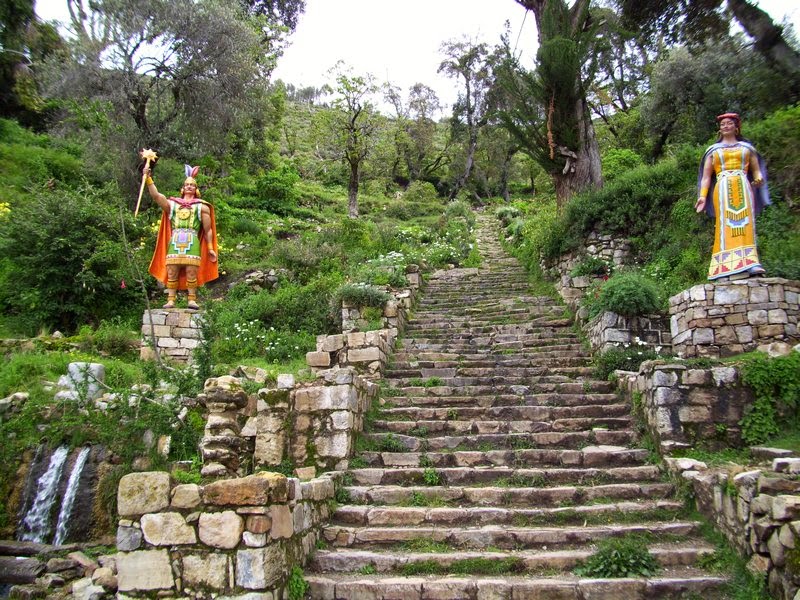 From Challa, it’s about another two hours’ walk southest to Yumani, the Island’s largest village and home to most of its accommodation. The spectacular views and modest Iglesia de San Antonio aside, Yumani’s most characteristic sight is the Escalera del Inca, a stairway running steeply down to the lakeshore through a natural amphitheatre covered by some of the island’s finest Inca agricultural terracing, irrigated by bubbling stone canals. The canals are fed by the Fuentes del Inca, a three-spouted spring believed to have magic powers: drink from all three, the locals say, and you’ll gain knowledge of the Spanish, Quechua and Aymara languages. At the bottom of the stairway by the beach are the remains of a minor Inca building. 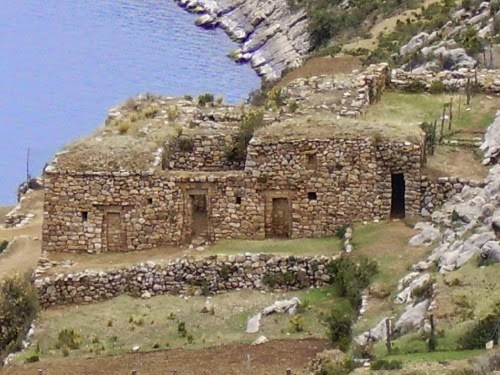 A short walk from Yumani, around the coast to the south along a path raised on an Inca stone platform, brings you to Pilko Kaina, the Island’s best preserved Inca site. Set on a cliff about 20m above the lake, the main structure is a large and fairly well-preserved two storey stone building with classic Inca trapezoidal doorways facing east across the lake to the Isla de la Luna and mountain peaks beyond its original function remains abscure. Pilgrims travelling to the Titikala from the mainland would have passed through here after landing at the far southern tip of the island.
Arrival and departure
You can visit isla del Sol on a half-or-full day trip from Copacabana, but it’s really worth spending at least a night on the island if you can. Boats call at the settlement of Yumani, where most of the hotels are located, and the village of Challapampa at the northern end of the island. It is also possible to hike to Yampaputa, where you should be able to find a rowing or motorboat to take you across to Yumani on Isla del Sol, or Isla de la Luna.
Boat tours


Boat tours from the beach in Copacabana at around 08:30am (for a full day), with additional half-day boats at 13:30. Full –day tours generally can briefly at Yumani before docking at Challapampa. They can head back to Yumani before returning to Copacabana in the afternoon. Isla de la Luna may also be included if enough passengers want to visit it. Some boats also visit the Islas flotantes (floating red islands), though these are not on the same scale as those on the Peruvian side of lake and many travelers are underwhelmed. If you want to hike across the island, you can get off at Challapampa, walk to Yumani and be picked up in the afternoon. Alternatively, you can buy a one –way ticket and pay the return fare to any available boat when you want to come back. Half day tours, which dock at Yumani, only give you a brief glimpse of the southern end of the island, and aren’t worth doing unless you’re really short of time.
Web page: www.travelstorebolivia.com